First out of the gate on TV, Murphy touts her rating as most effective freshman member of the U.S. House

WINTER PARK — U.S. Congresswoman Stephanie Murphy today launched her first television ad of the 2018 campaign. The 30-second television ad – “Working” – highlights Murphy’s biography as a former businesswoman, educator, and national security specialist and touts her record of getting the job done. The ad features some of her major bipartisan results, including improving veterans care, making our communities safer, and investing in Florida’s schools. The Murphy campaign said it is also launching a similar 15-second digital ad. The television ad may be viewed by clicking here. 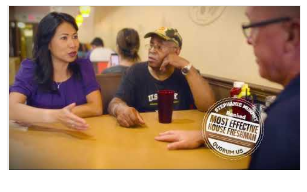 Statement from Stephanie Murphy: “Whether in the boardroom, the classroom, or in the Pentagon, we never cared if you were a Democrat or a Republican; we just focused on getting the job done. In my first term, I’ve been rated as the most effective House freshman and the seventh most bipartisan member of the entire U.S. House, and I believe I’m effective because I’m bipartisan.“Unlike my opponent, I don’t believe any party or any president has it right 100 percent of the time. Our campaign is about jobs, security, and equality, and about putting people over politics. That’s not just my promise to voters; that’s also my record.”TRANSCRIPT

STEPHANIE MURPHY:I’m Stephanie Murphy.I’ve been an educator, worked in business, and run this place, too. And before all that, I was a national security specialist. Through it all, no one cared if you were a Republican or Democrat – you just focused on getting the job done.So I’ve worked with both parties to pass new laws helping improve veterans care, make our communities safer, and invest in Florida schools.I’m Stephanie Murphy and I approve this message because it’s time Washington started working, too.

Congresswoman Stephanie Murphy is the Democratic nominee for Congress in Florida’s Seventh Congressional District, which includes all of Seminole County and much of northern Orange County, including Winter Park, Maitland, UCF, and downtown Orlando. Murphy is a former educator, businesswoman, and national security specialist at the U.S. Department of Defense. She lives in Winter Park, Fla., with her husband and two young children.