WINTER PARK — U.S. Congresswoman Stephanie Murphy today launched her second television ad of the 2018 campaign. The 30-second television ad – “Accountable” – centers on Murphy’s work to hold Congress accountable to the people. Murphy authored a bipartisan bill to institute a lifetime ban on Members of Congress becoming lobbyists, stop their automatic pay increases once and for all, ban first-class travel on the taxpayer dime, promote bipartisan bills, and ensure Members of Congress do their job and pass a budget — or they don’t get paid until they do. The Murphy campaign noted the ad will run on Orlando cable and broadcast, in addition to a 15-second version that is launching online.The television ad may be viewed by clicking here. 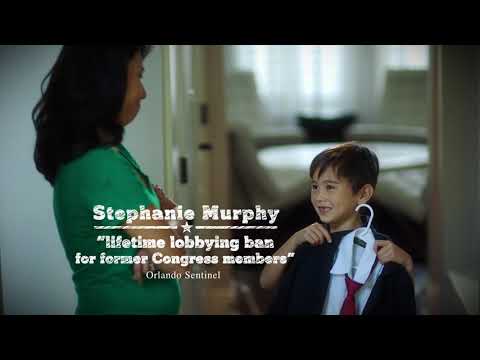 Statement from Stephanie Murphy: “Congress should serve the American people, not line their own pockets or cash out on their service.  That’s why I introduced bipartisan legislation to hold Congress accountable to the people and forcing Members of Congress to do their jobs or they don’t get paid. Americans have lost faith in a system that puts politics as usual over people. We teach our children to be responsible; it’s time we restore the public’s trust and do that with Congress, too.”TRANSCRIPT

Stephanie Murphy talking to her kids:Once you do your chores — you can have your allowance!STEPHANIE MURPHY:I’m Stephanie Murphy. We teach our kids to be responsible.It’s time we do that with Congress, too.It’s why I’m taking on politics as usual.To ban members of Congress from becoming lobbyists ever…Freeze congressional pay…And force them to do their job.I’m Stephanie Murphy and I approve this message because we have got to hold Congress accountable.LIEM MURPHY:Finished! How about double allowance?